Edgar Allan Poe is one of my favourite authors, because he can create certain moods that are peculiar to his work. It was with great pleasure that I rewrote his story, “The Tell-Tale Heart,” in a new point of view as an experiment. 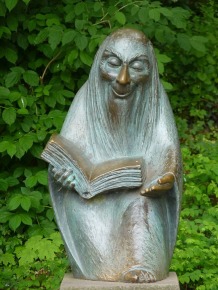 When a story is being told in first-person point of view, in which one character tells their story, the narrator only tells the reader things about themselves that the narrator wants the reader to know. In third-person limited, I must narrate all that is inside the character’s mind. The result?: This story becomes more strangely insane.

He put on a brave smile, and thought, ‘what have I to fear?’ He opened the door a crack, partially to let his smile shine through at them, and partially because it was most comfortable for his face to be exposed to the two officers gradually. He continued to open the whining door—it was a little aggravating, he thought—and beamed more greatly as the crack grew. The two officers in blue were stunning before his eyes, with the greenery behind them and daylight on their faces. “Welcome, welcome,” he gasped, most amiably he thought. “Might—might I ask what brings you here?”
The short fat officer grunted menacingly at him, “your neighbor heard a scream. We want to check in…” And the two policemen in blue burst forth through the door. Though they did not touch him, he felt pushed away from the door by their authority and vibes of superiority.
“My dear old master,” he said pleasantly, as he followed the heavy stepping officers down the hall, “he is surely still gallivanting in Rome.” Feeling more confident in his deceit, he took the lead, and led them through the whole of the house, until they at last came to his master’s room. He noticed, but knew that they would see nothing as they knelt and looked under his master’s bed. “Please, search all you will. Do let me know if I can be of some assistance,” he said smugly as they stood up, wheezing. He walked around the bed to the chest, and procuring the key, opened it with a ‘click,’ revealing to them his master’s twinkling treasures so that they could see that they were secure, undisturbed.
He felt that much time had passed, and in this later hour of the day, he had come to the conclusion that the more that he denied what he had done—to himself—and to the officers by letting them see nothing—the more he decided that he believed that in reality he had not done it—whatever that was, for he could not recall. It had not happened, after all. He strode out of the room and promptly returned with two chairs from the hall, and placed them before the bed, for it had not happened. “Please, gentlemen—sit,” he beckoned them. For it had not happened.
They settled down, and he took to using the front of his brain: they said endless nothings to him, while he said quick shallow pleasant things back at them. He made them smile and chuckle several times, and he smiled in unison.
He knew that he would get away with it, like a thief in the night—the cloak of night, his pretense. ‘Get away with what?’ a voice asked him: he felt his stomach drop, his hands grow shaky, and the colour drain out of his stiffening face, with fear and a sudden shock for what he had done. His heart pounded in his head. The officers continued to laugh about something especially profound which he must have said: their heads stretched upwards, their mouths contorting and enlarging as they laughed, and their laughs turned into terrible barks. He realized that they were laughing at him. They leant in at him—closer—closer.
He jumped up out of his chair, and the officers with their heads now almost reaching the ceiling followed him as he backed away across the room. ‘Why will they not just disappear?’ he thought pleadingly. A voice in his head which sounded like his own said, ‘because your time of pretense has run out,’ and the pounding grew and sharpened painfully.
He felt faint—as if he might vomit from the excitement. He dodged around the two leering officers, and taking up a chair, struck the other two so they flew across the floor—out of his way.
He dropped down to his knees before the bed and tore up the floorboards. “Look at what I have done,” he sobbed as the two officers drew up on either side of him: it had happened.
The pounding had turned into a ticking, and he realised that it came from his master’s wrist. His time of pretense had run out.

I wish to be a writer. View all posts by Stell R Star